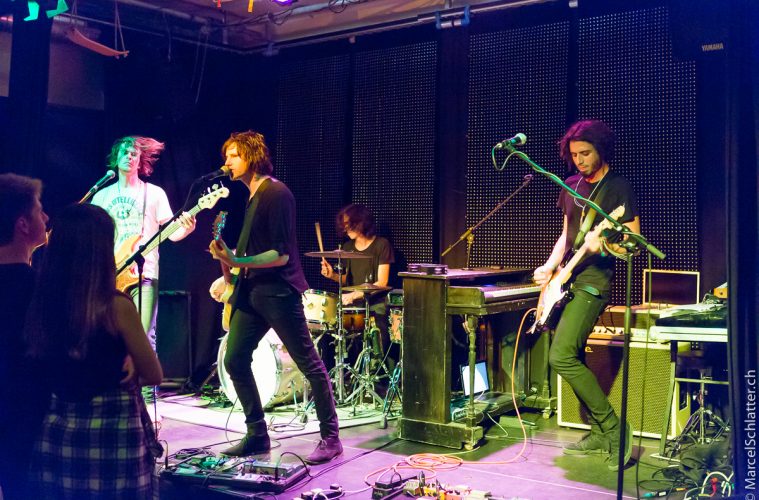 Interview mit ME the Band

ME the Band is currently (03. – 11.10.14) touring trough Switzerland, I met them at Kulturkeller Höngg and talked with Josh and Luke.

When was the moment when you decided to play guitar, drums, singing?

Luke: I don’t think I ever really decided…

Josh: My grandma gave me a guitar when I was about 6, It was the same guitar my dad learned how to play on… For some reason she wanted me to learn to sing and play guitar so it started when I was really young… and then I stopped when I was around 12, and then fell properly in love with music when I was about 14 or 15 and started playing and singing again… that was that really.

How did you meet each other and becoming the band ME?

Luke: We all met in Melbourne after moving there from regional country side places in Australia.

Where do you take your inspirations?

Josh: From Anything with honesty and soul.

Luke: From seeing amazing live performances… and wanting to better them.

How arise a song? Jamming? Or do you sit together and plan it?

Luke: Usually sit and plan, sometimes it comes out of jamming.

Josh: Usually jamming, most of the time the song is already out there though.. you just have to wait for the right moment and tap into it. Then it comes.

What was your funniest gig ever?

Josh: Once dislocated my knee on stage and had to go to the hospital after the show, I finished it first. I was also wearing strange makeup at the time, so the nurses just spent an hour laughing at me… Good times.

Luke: Our very first big day out show in front of thousands of people, we had prepared for it for about 2 months… It was 49 degrees on stage, our computer blew up! All the preparation we had done went down the toilet. It was still a good show, but it was fucking 49 degrees on stage!

Why does Mikey never wearing shoes at a show?

Luke: Because he feels most comfortable without shoes and he has to feel comfortable whilst playing bass, or else he can’t get into it. You’re lucky he wears pants!

You’re on tour at the moment trough Switzerland, how is it?

Josh: Awesome!!! Great place!!! We wanna come back here in march or April next year and do another tour!! Good people, good venues. Loads of fun!!!

Is there any band which you’re saying, yes with this guys we want to go on tour?

Luke: For us a lot of our favourite tours have been with bands where we don’t necessarily love their music, but we had a great time with the people in the bands ect, and it became more of a personal thing and ended up being a great tour and loads of fun. The music doesn’t always mean it’s going to be a great tour.

When was your last moment when music feels better together?

When you should compare your sound with a meal, which one would it be?

Josh: You shouldn’t compare your sound with a meal.

Luke: The buffet, you get a little bit of everything, and for some reason you can’t stop yourself coming back for more.

Thanks for your time and enjoy the rest of your tour here in Switzerland!